IMPORTANCE OF MATHS AND CALCULATIONS IN OUR LIVES

Maths is essential part of our life and the the importance of  maths and calculations is well known whether in engineering field, finance, artificial intelligence.  It is important for us to know branches in Maths and different methods of calculations and how knowledge of maths can help in choosing  right career options for students.

When we were young, we were always told to “Learn our 3R’s well?”

Now, what was this 3R’s learning about?

Even today, the primary education starts with Reading, Writing, &Arithmetic, because, this to me, is the foundation of all learning. The knowledge font.

Here I am primarily going to dwell on Arithmetic.

Arithmetic, for understanding, is an important branch of studying Maths.

Recall your childhood, your mother must have given, in fact, surrounded you with toys. To keep you engaged, she must have told you about the names of the toys in front of you. Imagine her joy when you correctly called out the name of the toy, be it an animal, a toy car/airplane, toy fruit or vegetables. Further, to add to your knowledge, color recognition was introduced and ultimately the numbers! One toy, two toys, three toys, such as one car, one banana and an apple and how many you have?

You must have been told to hold out ‘one finger for one toy, ‘two fingers for two toys’ and so on and so forth. Without your realizing, math entered your cognitive thoughts.

Very cleverly, smart parents add the next step of addition, subtraction and before you realize, multiplication and division will also enter your thought process. Is it that the parents are pushing these things on you and that it will be of no use to you later on? No, on the contrary, this one ‘R’ is of great importance as it embraces all aspects of your lives. It’s important for your studies, it’s important for your household budget planning, the salary you have to calculate which you cannot calculate without this basic knowledge. Your daily purchases, your various household bills like electricity – how many units consumed, at what rate per unit and what will be the total – you arrive at by multiplication.

Then comes the formal studies in the schools. Teachers pace you through more complex calculations, and all this is done to prepare you for your day-to-day life.

Doctor talks to you about your weight, again in numbers, so many kilograms. How much is a Kilogram – 1000 grams- numbers, your temperature is 99? Again a number!

Think of any aspect of your life, you have to have the knowledge of mathematics. How the parents and teachers explain and teach you this subject will develop your love or dislike of the subject. Abhorrence to mathematics is common with some children. Parents and teachers need to bring in the fun part of learning for children to not only learn the subject as an important subject in life, but also to excel in it.

However, as we grow, with the complexity of life growing, the need for understanding the importance of maths and calculations keeps growing and without realizing it, the other branches of mathematics creep into our lives, into our cognitive thoughts. To be understood, analyzed, applied, and then experimented.

I am keeping the matter simple for this write-up, though, with the increasing digitalization and computer skills, the study of math is gaining its importance in our lives by leaps and bounds.

Over a period of time and since time immemorial, various different ways have been used in teaching math. One very important method used with the use of ABACUS and the Indian system of learning by rote, mastering the tables – to start with the whole numbers and then the fractions- has given immense joy to the students over the years. You can say, centuries. There are various other methods in use, however, Vedic Math and Mental math has held a great opportunity for young minds to learn math and excel in it. Know more about how Vedic Maths and abacus are different.

Given below are some different variances of Abacus used over the centuries. This is only symbolic, not exhaustive: 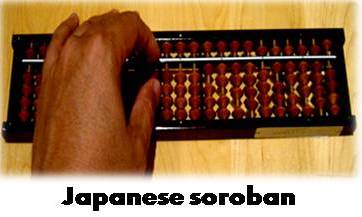 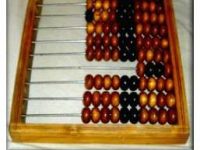 The decimal number system invented in India replaced the abacus in Western Europe.[28]

The Abhidharmakośabhāṣya of Vasubandhu (316-396), a Sanskrit work on Buddhist philosophy, says that the second-century CE philosopher Vasumitra said that “placing a wick (Sanskrit vartikā) on the number one (ekāṅka) means it is a one, while placing the wick on the number hundred means it is called a hundred, and on the number one thousand means it is a thousand”. It is unclear exactly what this arrangement may have been. Around the 5th century, Indian clerks were already finding new ways of recording the contents of the Abacus. Hindu texts used the term śūnya (zero) to indicate the empty column on the abacus.[30] (SOURCE; GOOGLE NETWORK)

Some of the other methods used include: DICE, CARDS, and FLASH CARDS etc.

(ALL PICTURES TAKEN FROM GOOGLE FROM VARIOUS SOURCES)

You shall notice that these common day-to-day fun games can be converted into tools for teaching math to small children. It depends on the imagination of the teacher, be it a parent or a classroom teacher in a playschool or a regular school. Children learn through three senses: Visual – by looking at the numbers; Audio – how the teacher verbalizes the number; Kinesthetic – handling the dice, rolling them, drawing out the cards and then writing the numbers, doing the additions, subtractions, multiplications even by using the LEGO blocks!

I may add here, smart teachers have been using cleverly worded poems/nursery rhymes, like, One Two – tie my shoe, Three Four – shut the door OR Ektitli, Anektitli etc. for helping children learn the numbers early in their growing up years.

Now, I would like to ask you all the parents as to why do you send your children to schools and colleges? The answer is very simple – for your children to gain knowledge, develop various skills to find gainful employment at the end of the studies. As mentioned at the beginning of this write-up, mathematics embraces each and every aspect of our lives, be it the day to day life, any profession we choose to follow, such as medicine, engineering, marketing, selling, legal, or any of the career options you think of, knowledge of maths and calculations has gained importance even more.

However, excelling in math and thereafter choosing any of its branches gives you so many career options:

The knowledge of math is opening avenues even in space travels, because, there are such complex calculations involved before the launch of a satellite, its trajectory, the speed at which it has to take off, the thrust that needs to be developed at the time of takeoff, etc., etc.

To support my thought, let me quote from an article, which appeared in The Times Of India, issue dated Tuesday, July 2, 2019, written by Swati Bhardwaj Chand, Akhil George, and Sujit John, on “…….AI, IOT fuelling new chip design” and I quote, “Developing specialized AI chips requires knowledge of both computer science and Mathematics, AI is numerical software and it’s the mathematics that differentiates.”

Don’t you think that the opportunities are unlimited with the knowledge of math and excelling in it?

IF you want your children to soar the heights with the knowledge of mathematics, think of Winaum Learning.

At WINAUM LEARNING the promoters have developed a simple but very effective tool called, MAPLE MATHS. Taking inspiration from all the different tools of learning math, as mentioned above, Winaum has developed a unique method of teaching math to growing children. Children as early as 4/5 years old can start learning the basics of arithmetic through their curriculum. They not only learn math quickly, they learn it as a fun activity. They start doing the basic calculations faster and with greater accuracy and with confidence. This lays a solid base for learning, later on in their lives, of more complex calculations without getting stretched.

Maple Math program, conducted by Winaum Learning, focuses on the four main pillars of Maths- Addition, Subtraction, Multiplication and Division. It is designed to develop the interest of Math in Children and increase their speed of calculation through a combination of assignments in books, speed calculation techniques, and games with hands-on tools. It focuses on school maths operations in arithmetic skills along with mental maths speed techniques which help in fast calculations. It includes a games-based teaching methodology in the program that gives children a practical approach to maths so that they learn naturally.

To support their teaching of Maple Maths, they regularly conduct Maths Classes and Maths Olympiads.

It’s these Maths classes and Maths Olympiads that give children the opportunity to learn and then compete with the same age groups across the schools and regions.

Allow me to venture into the Benefits of Maple Maths based on Maths Classes conducted by Winaum:

This clearly helps children at the time of participating in the Maths Olympiads organized by Winaum Learning.

Now, let us talk about the MAPLE MATHS OUTCOMES FOR THE CHILD
The Program will help build and advance your child’s math skills.

The child will become CONFIDENT and SELF RELIANT.

Book a free trial
Be a teacher

At the end, I wish to state that, look at learning Arithmetic as a universal key capable of opening many a lock for your advancement in your career offering multiple options. That is why we need to understand the importance of maths and calculations in our lives. Just embrace it as a passion like anything you love to do, take it as the subject, or even as an accomplishment for you to surprise your family and friends! Can you recall Ms. Shakuntala Devi who earned lacks of rupees with her mastery over mental math?

Your child could be the next math wizard

Summer Camp in Gurgaon for Kids

Tips for Success in Maths Exam

Is Abacus a Computer?

Why Maths is so Important?